"That’s what people elected you to do" 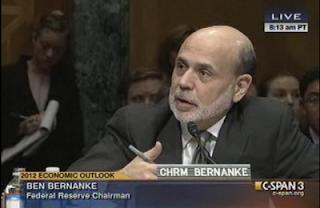 "Although historical experience and economic theory do not indicate the exact threshold at which the perceived risks associated with the U.S. public debt would increase markedly, we can be sure that, without corrective action, our fiscal trajectory will move the nation ever closer to that point. To achieve economic and financial stability, U.S. fiscal policy must be placed on a sustainable path that ensures that debt relative to national income is at least stable or, preferably, declining over time. Attaining this goal should be a top priority." (Bernanke testimony before Congress) http://www.federalreserve.gov/newsevents/testimony/bernanke20120202a.htm

Ben Bernanke may be the last honest public servant in Washington. Although only monetary policy is the domain of the Federal Reserve, the Chairman nonetheless has, more than once, warned Congress and the President that they need to take action as soon as possible to correct U.S. fiscal policy:

Bernanke Defends Fed’s Approach - NYTimes.com: "Republicans sought Mr. Bernanke’s affirmation that the jobs market remains very bad and that the economy remains in poor shape. Mr. Bernanke gave his assent. Democrats asked Mr. Bernanke to acknowledge that economic conditions are improving, and he did this, too. Mr. Bernanke also continued to emphasize the need for Congress to set a long-term plan for deficit reduction, saying that this should be done “as soon as possible.” “We clearly need some major changes in our fiscal planning, in our fiscal path going forward,” he said. Both parties were stymied in their efforts to extract his support for their approach to creating such a plan. Republicans want to balance the federal budget primarily through spending cuts, while Democrats say the government must increase tax collections too. Mr. Bernanke, pressed repeatedly, was blunt in response: “That’s what people elected you to do,” he said."
Tweet    Follow @johnmpoole