Somebody needs to level with the American people. Obama, from his State of the Union speech, is not going to do it. The voice crying in the wilderness, Ron Paul, is ignored by the majority of voters (Democrat, Independent and Republican), but Bowles Simpson and the credit downgrade and Ben Bernanke's warnings are consistent--U.S. fiscal policy is unsustainable and on a disastrous path. Here's the whole truth neither Democrats nor Republicans want to admit: spending is too high and revenue is too low. The recommendations of Bowles Simpson is comprehensive reform of both entitlements and the tax code (fairer, simpler, etc.).  When I go to mittromney.com and look for his position on tax policy this is what I get:

“The best course in the near term is to overhaul and to dramatically simplify the current tax code, eliminate taxes on savings for the middle class, and recognize that because we tax investment at both the corporate and individual level, we should align our combined rates with those of competing nations. Lower taxes and a simpler tax code will help families and create jobs.”
(Mitt Romney, No Apology )

OK, but when I drill down to his policy statement (see below)--"a flatter, fairer, simpler structure" is, unfortunately, only a "long-term goal" not "near term" as stated above.  Memo to the Romney campaign: "long-term goal" means to the average voter "it's never going to happen." Romney's campaign better re-tool if they are serious. Reality: whoever is elected President would probably only be able to accomplish comprehensive reforms of entitlements and the tax code in the first twelve months of his term. (Suggestion: my recommendation on fiscal reform which provides for the complete elimination of payroll and self-employment taxes.) (Also note: Romney offers no specifics on "entitlements reform" other than "block grant Medicaid and pursue further entitlement reform."--whatever that means.) 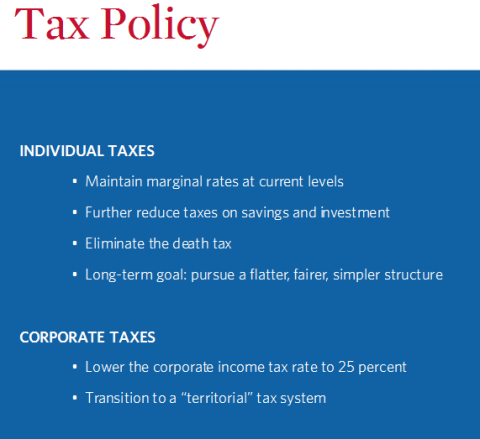