Last night it quickly became obvious Romney would have a big win in Florida.  The Florida voters focused on 2 main things: 1) who has the best chance of beating Barack Obama; and 2) who can do the best job to turn the economy around.  The unequivocal answer to both questions: Mitt Romney.
Romney Wins Big in Florida Primary - WSJ.com: ""Everyone is starting to believe Romney is the person who can beat the president and go on to turn the economy around," said state Rep. Will Weatherford, a Republican and Romney supporter who represents the bellwether of Pasco County, just north of Tampa. "They look at Mitt Romney and see someone who can win.""

Romney won the demographics across the board--young, seniors, Hispanics, all income levels and education levels, and even split the evangelical vote with Gingrich. Gingrich lost the female vote Tuesday night to former Massachusetts Gov. Mitt Romney by a 22 percentage point margin!

Romney won every urban area of Florida, and the I-4 corridor, by substantial numbers.  Some of these results are astounding (source: http://www.google.com/elections/ed/us/results) : 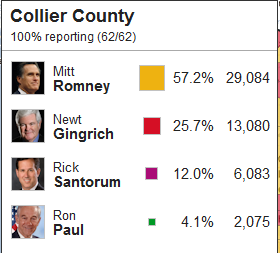 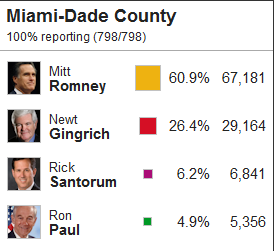 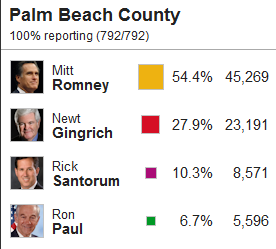