What will the election outcome be? Well who do you believe?--

Nov. 1: The Simple Case for Saying Obama Is the Favorite - NYTimes.com: "By NATE SILVER--If you are following some of the same people that I do on Twitter, you may have noticed some pushback about our contention that Barack Obama is a favorite (and certainly not a lock) to be re-elected. I haven’t come across too many analyses suggesting that Mitt Romney is the favorite. (There are exceptions.) But there are plenty of people who say that the race is a “tossup.” What I find confounding about this is that the argument we’re making is exceedingly simple. Here it is: Obama’s ahead in Ohio . . . ."

Karl Rove: Sifting the Numbers for a Winner - WSJ.com: " . . . Desperate Democrats are now hanging their hopes on a new Quinnipiac University/New York Times/CBS News poll showing the president with a five-point Ohio lead. But that survey gives Democrats a +8 advantage in turnout, the same advantage Democrats had in 2008. That assumption is, to put it gently, absurd. In addition to the data, the anecdotal and intangible evidence—from crowd sizes to each side's closing arguments—give the sense that the odds favor Mr. Romney. They do. My prediction: Sometime after the cock crows on the morning of Nov. 7, Mitt Romney will be declared America's 45th president. Let's call it 51%-48%, with Mr. Romney carrying at least 279 Electoral College votes, probably more. --Mr. Rove, a former deputy chief of staff to President George W. Bush, helped organize the political action committee American Crossroads."

One thing for sure--they both can't be right!! Here's the real map as best as I can tell on the eve of the election--you can plug in the actual results as they occur in real time: http://www.realclearpolitics.com/epolls/2012/president/obama_vs_romney_create_your_own_electoral_college_map.html 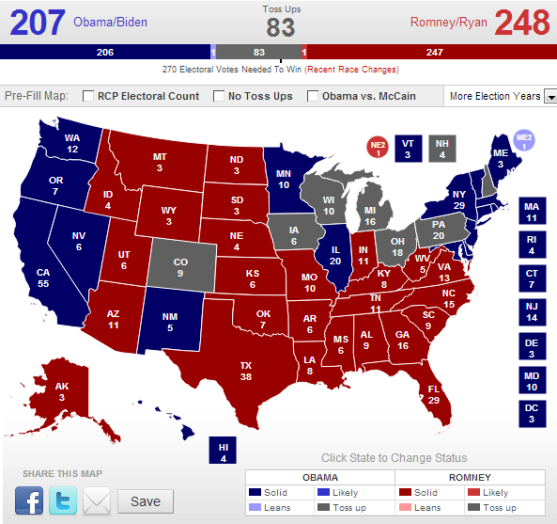 Yes, I have Virginia as red (for Romney) as the most reliable polls have a slight edge for Romney. IF Romney wins Virginia and the other states he is currently leading, the map will look as shown above--quite a difference from what mainstream media would have you believe (LOL)!! That would leave New Hampshire, Pennsylvania, Ohio, Michigan, Wisconsin, Iowa and Colorado--just 7 states. Yes, it's possible Romney won't win ANY of those 7 states. It's also possible he could win the election by winning Ohio and just one other state among those 7 toss-ups. If Romney wins more than that, it's not a "close" election (at least in electoral college votes). Stay tuned.