Mitt Romney is still not taking this "crategate" issue seriously, and it's probably going to cost him the election (if he's nominated).  On February 17th, I posted--

Views under the Palm - johnmpoole.com: 2012: The election is over - Obama won!: " . . . And then there's the coup de grâce which I will refer to as "crategate." This story has gone viral. Americans tolerate a lot of things they shouldn't--like an over-intrusive TSA, an incarceration rate and prisons that most civilized countries find shameful, and legislation with serious constitutional infringements--but most Americans have about as much tolerance for any kind of perceived animal cruelty as they do for any politician who claims to have been "brainwashed." And, if you haven't noticed, dogs and cats dominate American life.

So while most Americans personally like President Obama and his family, and yet may have some reservations about his first term (and to his credit he has admitted some shortcomings himself),come election day, the voters will ensure that Bo resides in the White House and rides inside the Presidential limo for another four years:


and somewhere in heaven above, Ted Kennedy (who gave Bo to the Obamas) must be having a really good laugh about all of this!"

One thing is for sure--Axelrod and Company are taking this issue seriously and doing everything they can to line up all the animal lovers for Obama--just look at this ad: 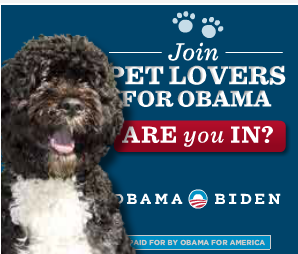