Reading the returns and exit polls early on this evening of Super Tuesday, and having watched President Obama at his press conference earlier today-- 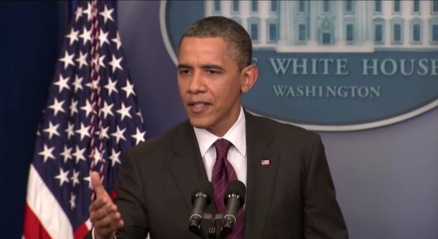 there is quite a contrast between the President and his potential opponents. I think the Republicans have succeeded in this primary season of irreparably damaging their leading candidate and, for sure, the only guy who could have run a competitive race against President Obama--Mitt Romney. Nonetheless, based on early results showing Romney winning Virginia, Vermont, Massachusetts, and Ohio, plus looking ahead to the rest of the primaries and caucuses yet to come, crunching the numbers (and ruling out something unexpected), Romney should have no problem gathering sufficient delegates prior to the Republican convention to win the nomination.  Santorum is finished--Ohio Catholics voted for Romney 43%  vs. Santorum 30% (CNN exit poll)--although Santorum appears to have won Tennessee and Oklahoma, and no doubt will add further victories before this season ends.

Bottom line: President Obama now holds the "high ground"--he was the epitome of reason and reasonableness at his press conference today, while the Republicans come across with a collective image of ridiculous rhetoric. The biggest threats to an Obama re-election at this point are the foreign "unknowns"--Israel/Iran, Eurocrisis, China's economy-- over which he has little control.