I wonder who was happier with the South Carolina results--Newt or David Axelrod?  I guess there's nothing like the zeal of a mob and it appears that is what Gingrich was able to pull off in the Palmetto State Republican primary. Of course I remember the zeal of the mob in the Republican Party in 1964--"Extremism in the defense of liberty is no vice"--and the end result was a landslide for Democrat LBJ. Only 6 states went Republican: 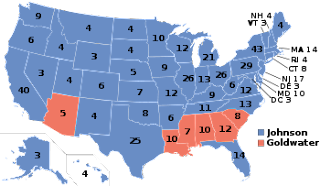 In any event, Florida is next up and it is a different state altogether from South Carolina.  We have had 3 small state contests. Each of those states have very parochial and peculiar traits that distinguish them from the nation as a whole.  Florida is big (29 electoral college votes, same as New York), with lots of cities, lots of people who moved from elsewhere in the US and the rest of the world. It will be interesting.