"Pick your poison" was my last statement on the quandary the American electorate faces in this year's Presidential election. But despite Obama's vulnerability to defeat, the Republicans and Romney are doing their best to re-elect Obama. Want some specifics? Here are two sources-- 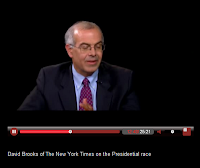 Romney Re-Explains Why He Can’t Be Trusted on Health Care - Bloomberg: "For a conservative approach to fix at least part of the affordability problem, see this article from National Affairs by James Capretta and Tom Miller. Capretta and Miller propose to combine a Romney-style proposal on pre-existing conditions with significantly expanded funding for high-risk insurance pools, in hopes of covering up to 4 million uninsured Americans with pre-existing conditions. But Capretta and Miller estimate that their plan would cost somewhere on the order of $200 billion over 10 years. Where is the indication that Romney plans to make such a significant financial commitment, let alone get one out of a Republican Congress? Romney's platform is full of expensive promises -- restore $700 billion in Medicare cuts, grow defense spending to 4 percent of GDP, cut tax rates. It funds these promises in part by drastically cutting spending on health care for the non-elderly. . . "

Insincerity, bumbling campaign management and worse--I wonder if Romney is trying to lose because he understands the dire fiscal situation of the United States and knows neither the Obama campaign nor his campaign are telling the American people the truth, and whoever wins the election is probably the "loser" because of the almost impossible task ahead.

Tip to the Obama campaign--just pick up on Bill Clinton's arithmetic theme for the Presidential debates ahead--Romney's math doesn't "add up" and the American people don't like being played for suckers.  Offense is the best defense for the Obama campaign since the President can't run on his record and of course he can't talk about the true reality of our fiscal mess and weak economy.

Tip to the Romney campaign--get honest, sincere, and competent real fast, or forget about ever winning the Presidential race.